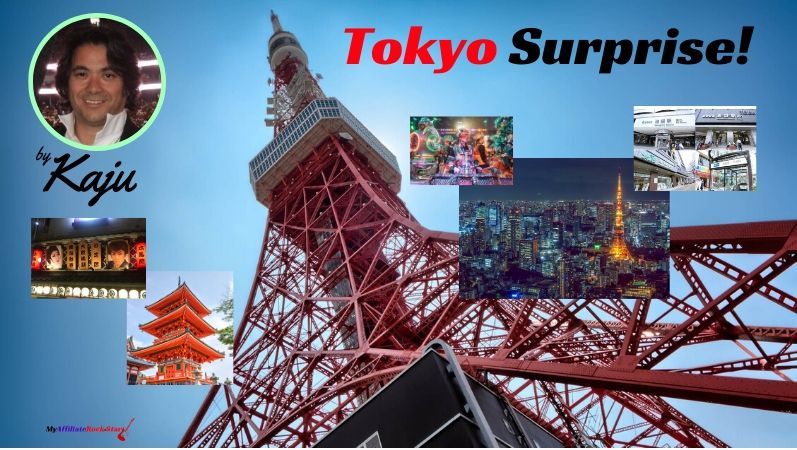 In between the historical ceremonies for Su Beng, riding atop his motorcade and beating the drums in Taipei, we had a 3-day gargantuan Tokyo Surprise!

Tokyo was incredible! As large as Godzilla, and as colorful as a peacock!

In retrospect I loved Tokyo! It was a boatload of surprises! It was my first time in Tokyo. Although it was a short 3 day stay, we did an amazing amount of stuff.

I suppose by no coincidence, we later found out that Tokyo Surprise was the name of an exciting campaign that began in December 2018. 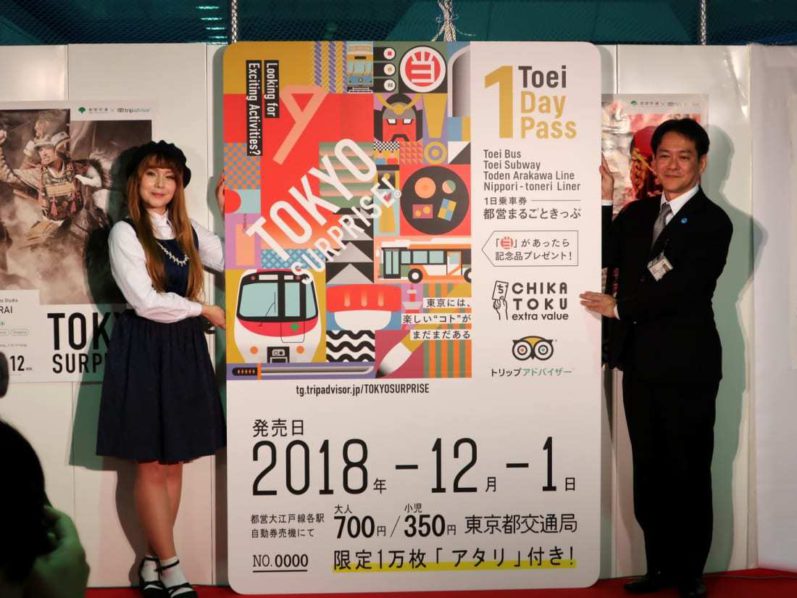 Apparently the Tokyo Metropolitan Bureau of Transportation (Toei Transportation) has teamed up with massive travel website Tripadvisor and created a campaign whose aim is to promote a lineup of unique Tokyo experiences for visitors to Tokyo. 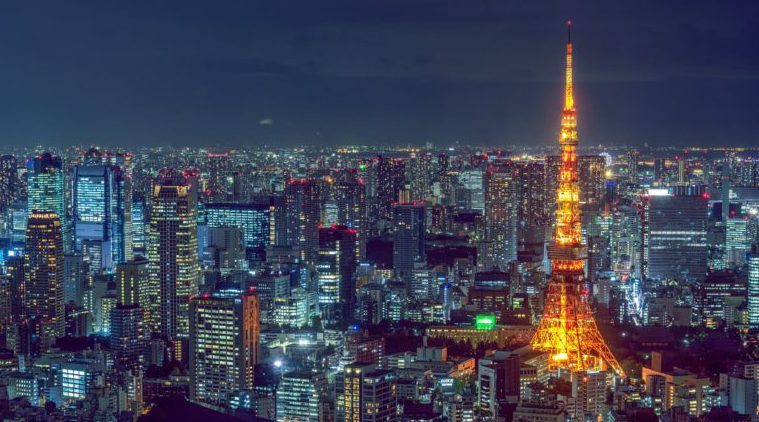 Tokyo: The Best Large City in the World

Now I surely know the reason why Tokyo was voted by Conde Naste Traveler this year and for 4 consecutive years running to be the Best Large City in the World.

Entering Tokyo on a side trip for the first time was like a total visceral attack of all the senses!

We did it the smart way, I pre-booked a round trip ticket on the high speed rail to-and-from Narita airport with a 72 hour unlimited pass on the Tokyo underground. For the next 3 days we rode this almost wherever we would go, as riding in taxis in Tokyo are soooo expensive!!

Boy, if anyone thought navigating the NYC subways was complex, NYC ain’t got nothin’ on Tokyo’s underground! Look at this map of intersecting “spaghetti” strings! 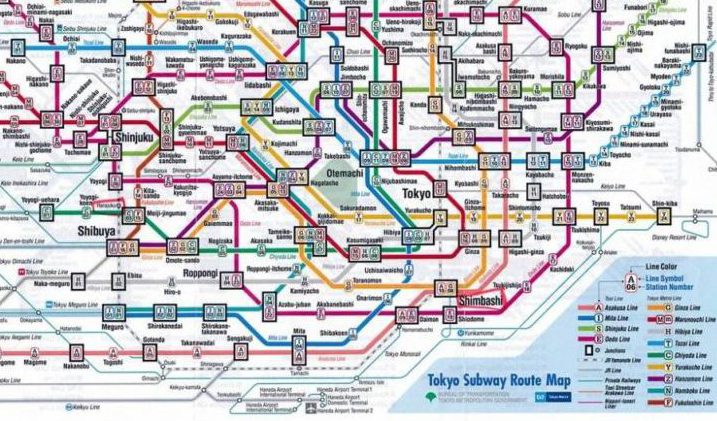 However, following the subway map was quite easy to get around, that wasn’t the issue. Getting off the subway and finding your way was the REAL adventure in itself! If you disembarked at the wrong exit, you were screwed! You could be on the completely other side of town!

So you better know what exit to get off, but every subway station was like a gigantic mall where you couldn’t read the language!

We found this out quickly when we immediately had to find the correct exit to leave from to visit Su Beng’s noodle shop at the Ikebekuro station. It was like a maze! 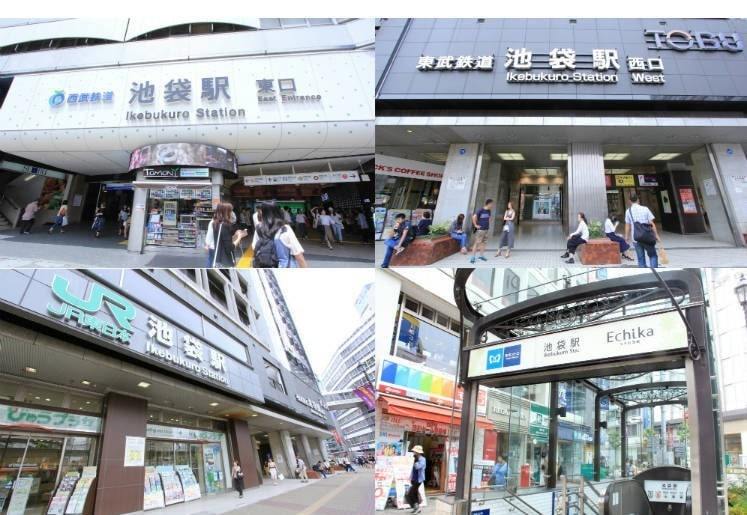 Getting off at the wrong exit (like anyone of the 4 above) would leave you like over a mile away from your destination area! So we asked, searched…and finally discovered we need to get off at Exit 6A, on the WEST Corridor!

Once out on the street, here we go onto our next adventure. Instructions were to “look for the Kentucky Fried Chicken diagonally across from the Starbuck’s, turn right down a narrow alley, make a left and you will see an unmarked noodle shop….What???!!!

Well, after “flagging down” an elderly local Japanese man who assisted us in finding Su Beng’s noodle shop – which still was NOT easy even for him – after 20 minutes we found it! And we a first point of interest it was worth it. 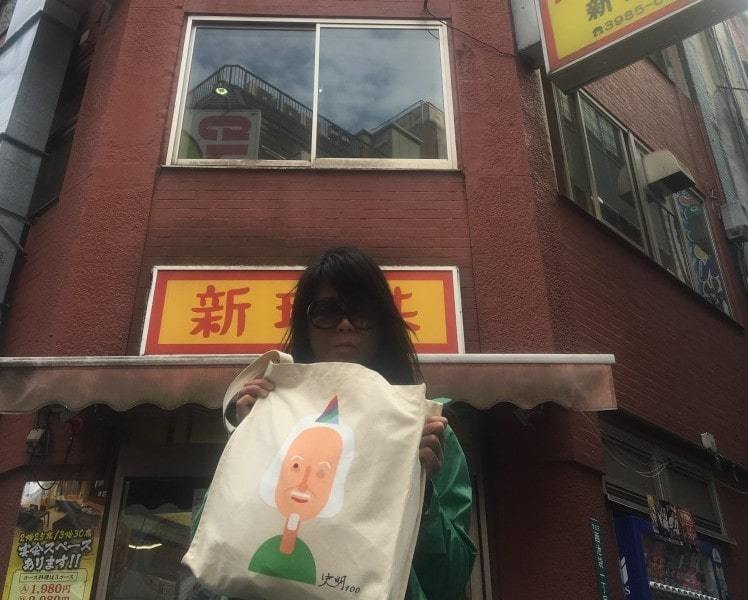 Here is Felicia in front of Su Beng’ s famous noodle shop. The food was excellent and business was good!

After spending an hour there and eating a delicious lunch of noodles and dumplings we were off on an adventure again to find our hotel. Taking the subway to the Toyocho stop, we thought we found it – only to be told it was A DIFFERENT Sotetsu Hotel 3 stops in the other direction!

We finally made it there, and it was a well-organized extremely efficiently laid out 8’ x 10’ box – very comfortable if you are in an airplane! Still a very nice room though! 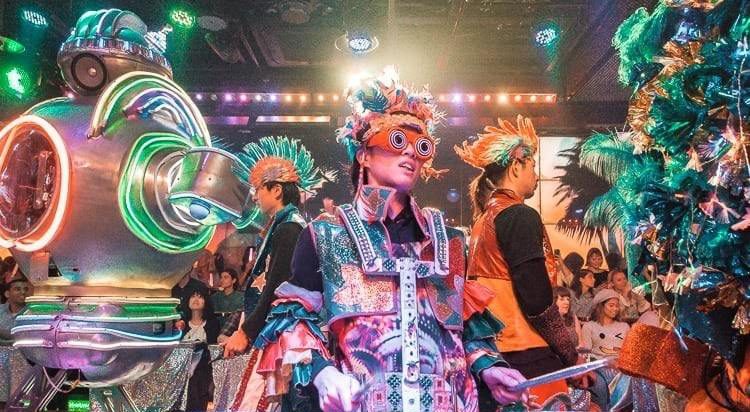 Our first stop was in the neighborhood of Shinjuku where we had tickets to see an AMAZING show at the Robot Restaurant. This is a MUST go-to place if you are in Tokyo, and I am so glad I pre-booked the tickets in Taiwan. 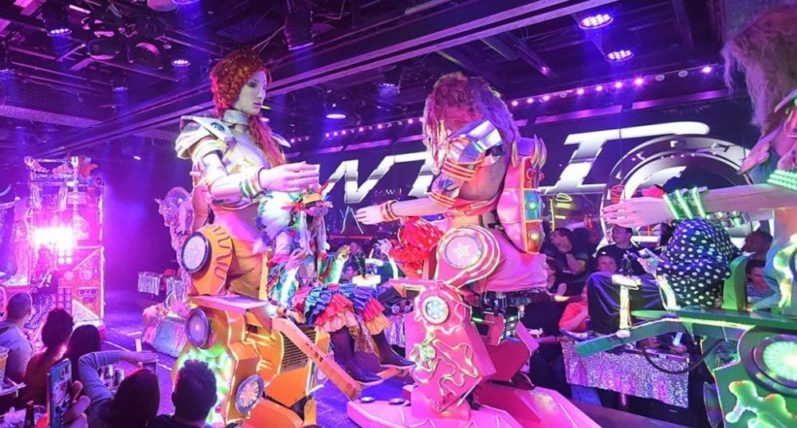 I remember seeing this place years ago on Anthony Bourdain – he said he’d seen some of the greatest performances like Jimi Hendrix, Queen at Live Aid but "This is the greatest show I have seen in my life".

You sense will be viscerally immersed in all directions! The scale of it is amazing, the colors, the number of lasers is amazing. The fact that it tells the origin story of Japan was amazing. This is the one "kooky, crazy thing" in Tokyo I recommend everyone do. Just don’t eat there, as the food is generic. 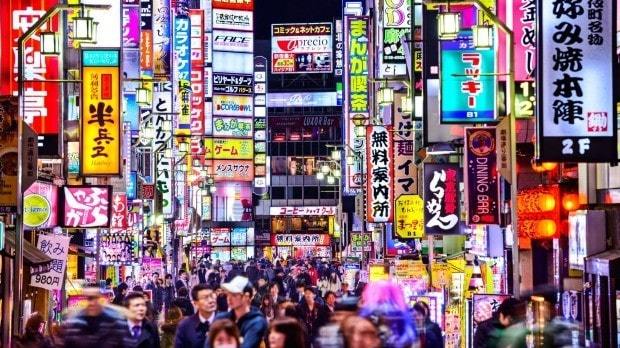 Afterwards, we wandered around and got lost in Shinjuku – which is a much better version of Times Square done right! 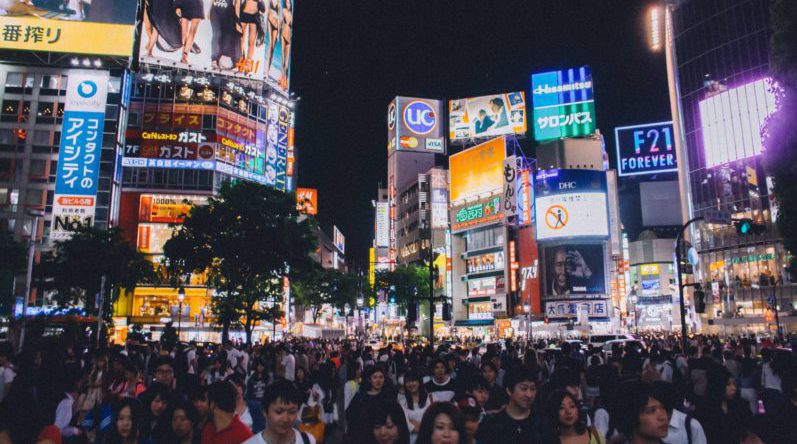 The next day we visited Tokyo Skytree, Built in 2012 it’s the 2nd tallest man-made structure on earth at 2080 feet tall. 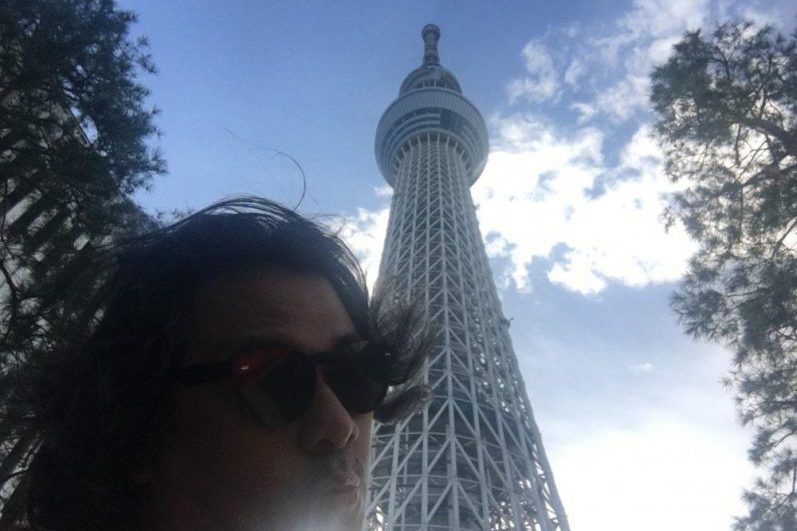 Here I am up in the observatory some 450 meters above street level. What a great view of Tokyo! 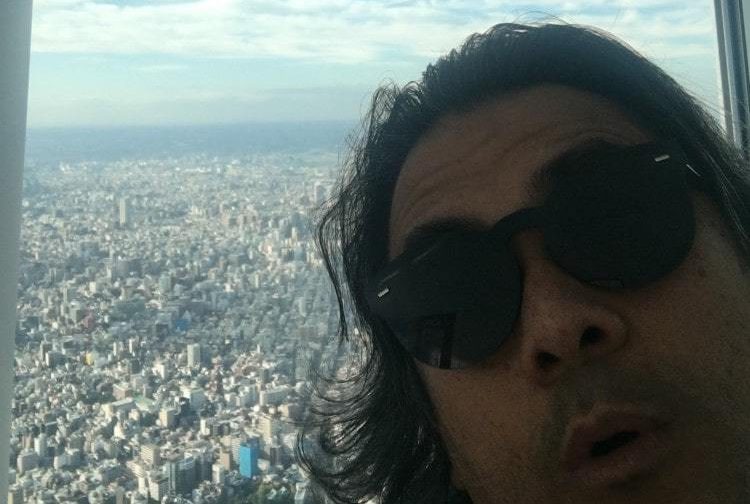 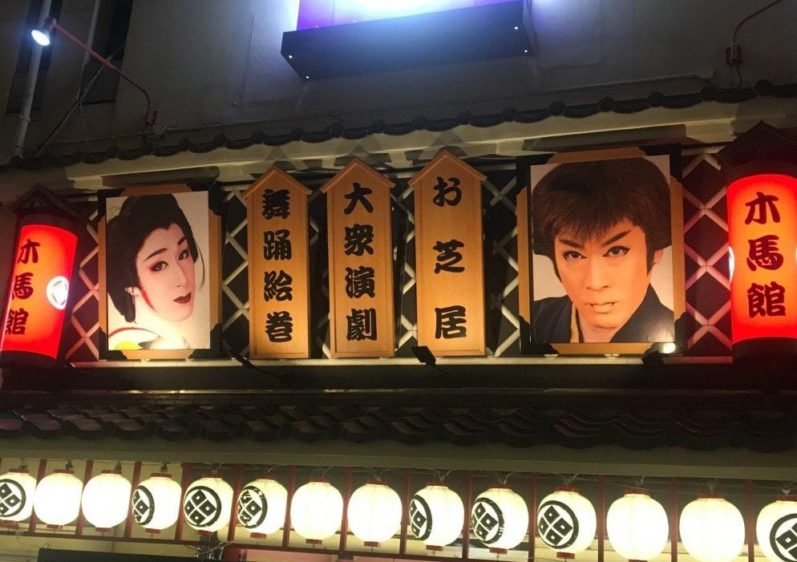 This is where we visited the beautiful Senso-Ji Temple, and explored the interesting maze of alleys and shrines! 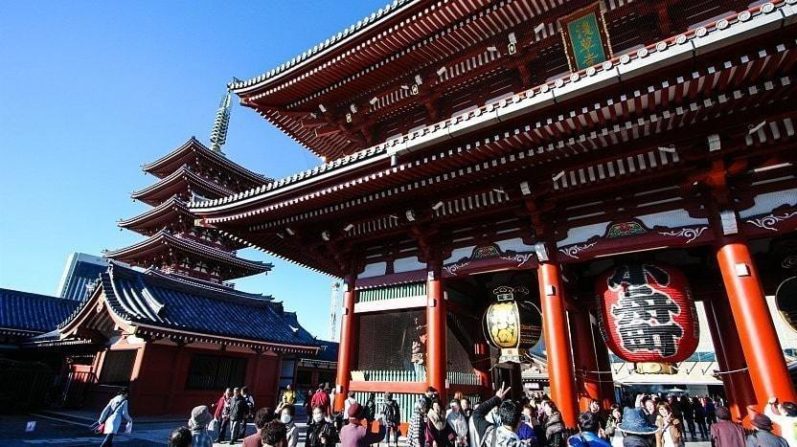 Felicia became thirsty from the walking, so we stopped for some delicious BubbleTea! 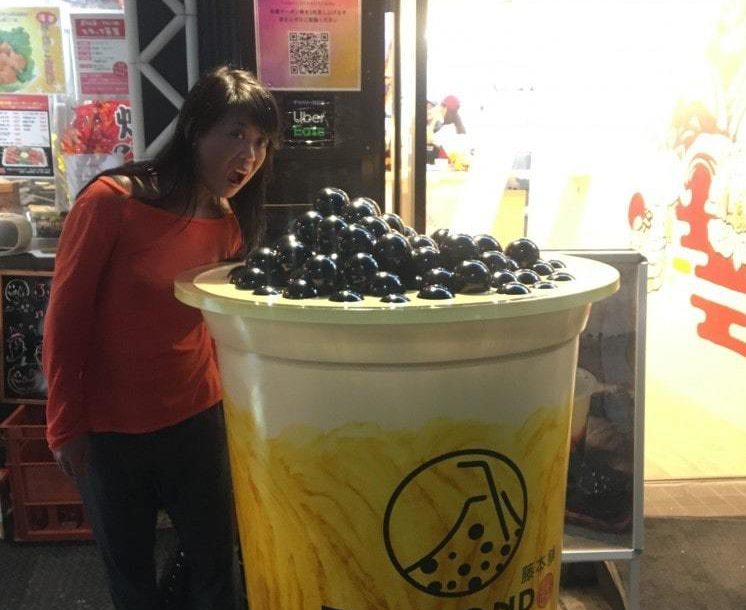 I ended up feeling queasy from eating some not-so-agreeable food, so we rested back at the hotel – but by 11:30PM we were off to the trendy neighborhood of Shibuya, famous for one of the most densely crossed streets, the Shibuya Crossing.

This street crossing has been made famous in many movies including “Lost in Translation”, and “The Fast and the Furious” series. The rare taxi ride from our hotel to Shibuya was expensive but well-worth it! (by midnight the Tokyo Metro was closed) 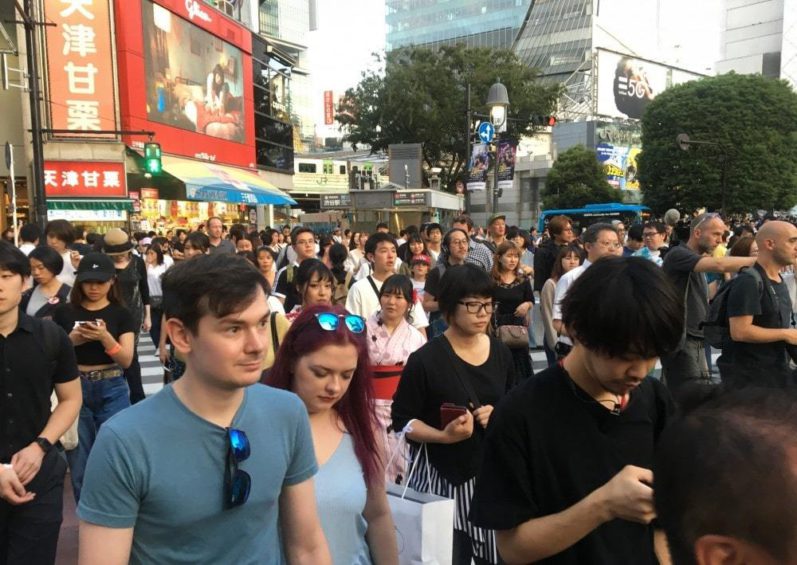 What made this all worthwhile, is that while we were in Shibuya, I was searching to find THE place to shoot my first You Tube Series episode Karaoke Pub Crawl – and by 5:15am I found it.

It was absolutely Perfecto! The small wooden intimacy, the energy, and crazy local Japanese people – this entire place was ROCKIN’ with excitement! But I will leave this longer story for another blog post! 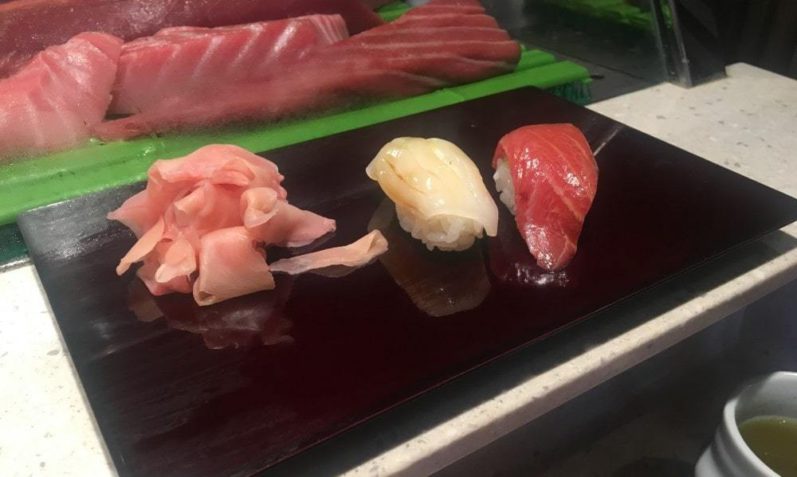 Tokyo Surprise! Non-Stop Off to the Best Sushi Breakfast

By 6:00 am, we were on the subway once again going far away to the Toyosu Fish Market for the Best Sushi breakfast in the world. We heard that the place to go was Sushi Dai, but even at 5:30am the lines to get in are 3 hours long! 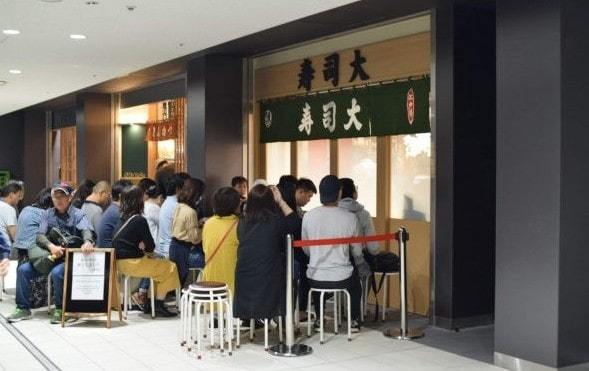 However, through my research I found an even BETTER place where the lines was only 25-30 minutes – that arguably served some of the best sushi in the world!

And when we finally ordered our omakase sushi breakfast served by the well-skilled chef we were NOT disappointed!

By 9:30am, we were back to the hotel, and just in time for the included continental breakfast. We had to check out by 10:00am, and we were of then off to Harajuku, the beautiful trendy district of small, youth-oriented culture, and independent boutiques and cafés.

It was a gorgeous day, so we ended it by taking a picnic rest in nearby Yoyogi Park before taking our bags on the high speed rail back to the airport.

Yes, it was a short 3 day but non-stop Tokyo trip, but SO well worth it. 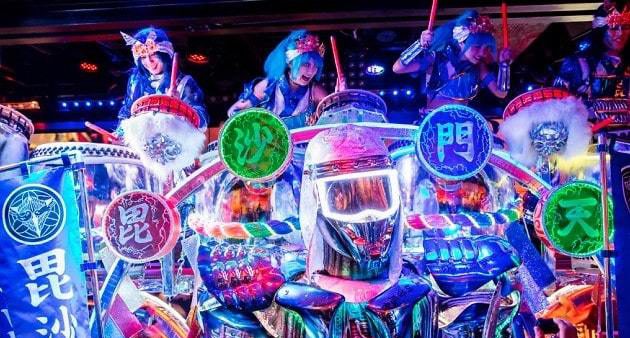 Looking forward to coming back again for an extended stay, then going to Kyoto and Hokkaido for the Cherry Blossom Festival

Shortly our long-awaited special Tokyo Surprise would end, and it would be a 3-hour flight back into history with our return to Taipei!