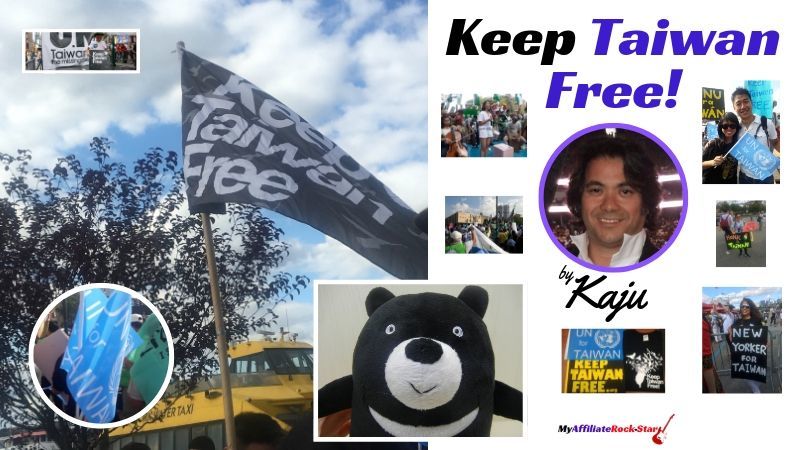 In the end, they marched for an opportunity to make lives better.

Let me first say, this is not intended to be a political post. This is a vicarious journey by an impartial observer (myself) accompanying friends by being a participant in an annual cultural rally.

For many proud Taiwanese Americans, they must be heard. And they must continue to fight.  The “Keep Taiwan Free” annual rally march is a call for freedom. 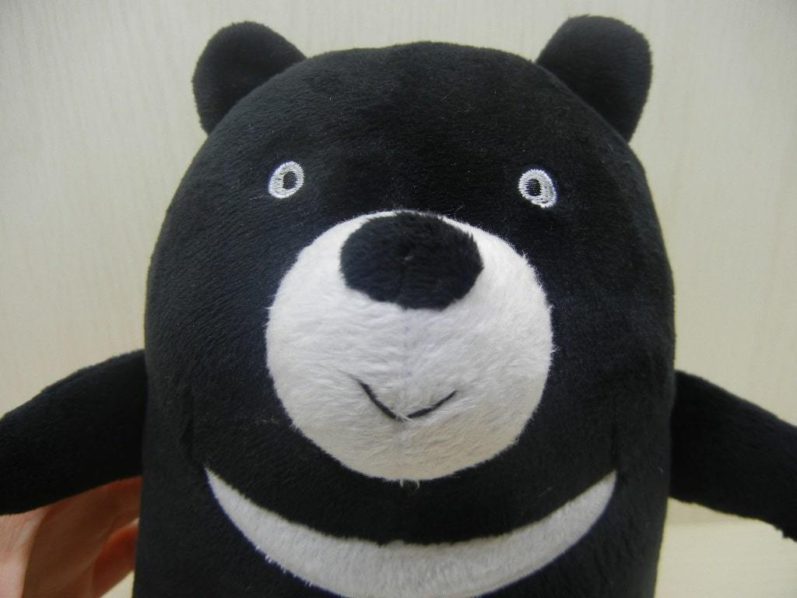 This march held every year in early September in NYC is for a very important cause where an entire independent country such as Taiwan – a nation who has been self-governing and independent since the end of World War II - has continued to be marginalized and relegated to an inferior standard by China, as well as for not being recognized as a sovereign nation by the United Nations Council.

On a lighter note, to honor Taiwan don't forget the famous Formosa Bear as seen above, the very friendly mascot of Taiwan!

Please read my past article about the history of Taiwan here by clicking the link below.

Passport to Taiwan Festival: A Brief History of Taiwan

On this gorgeous Indian summer day in NYC, it all started with a glorious rally that began at 2:30 pm in front of the Chinese consulate on the west end of Manhattan on 42nd street and 12th Ave, replete with rousing speeches, vitriolic condemnations, and a solidarity of common purpose.

After 45 minutes of great speeches in front of the Circle Line on the West Side Highway, we then proceeded to March eastbound on 42nd Street through Hell's Kitchen, past the Port Authority terminal, through Times Square, past Bryant Park, alongside Grand Central, all the way to the United Nations Park. 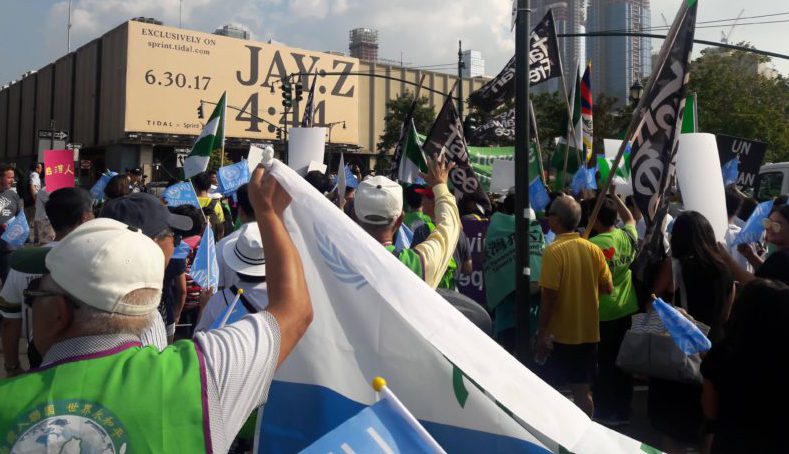 All the while, several supporters were leading the charge with megaphones, waving large Taiwan flags and signs, bellowing fervor chants of "Keep Taiwan Free" and "UN for Taiwan" and "Taiwan is Taiwan".

However, the demonstration was extremely orderly and well-mannered, as 400 strong always walked on the sidewalks while never changing other than crossing the avenues, even without a few NYPD policemen along the way smiling and escorting the line. 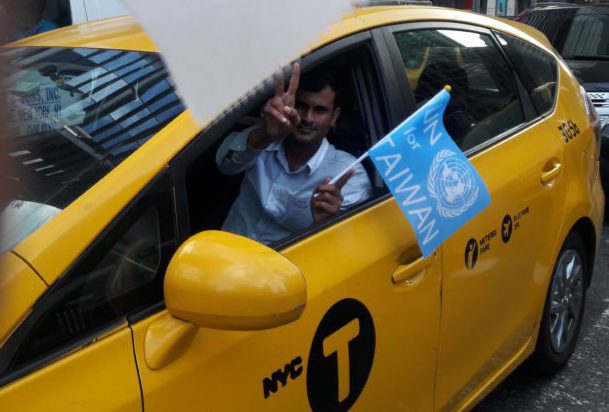 On the way we met some very unusual yet enthusiastic and interested supporters of Taiwan who "waved the flag" proudly with us; a NYC taxi driver near Bryant Park, and a life size wax celebrity outside Madame Tussad's Wax Museum in Time Square! 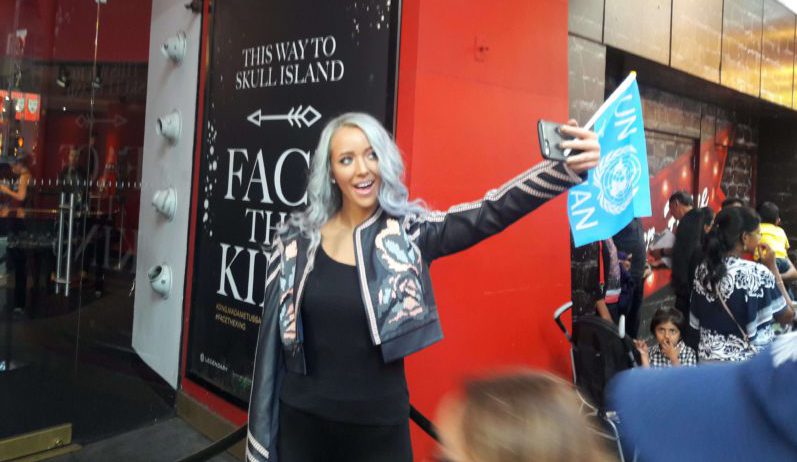 It was quite an amazing day of mutual love, solidarity, and camaraderie! 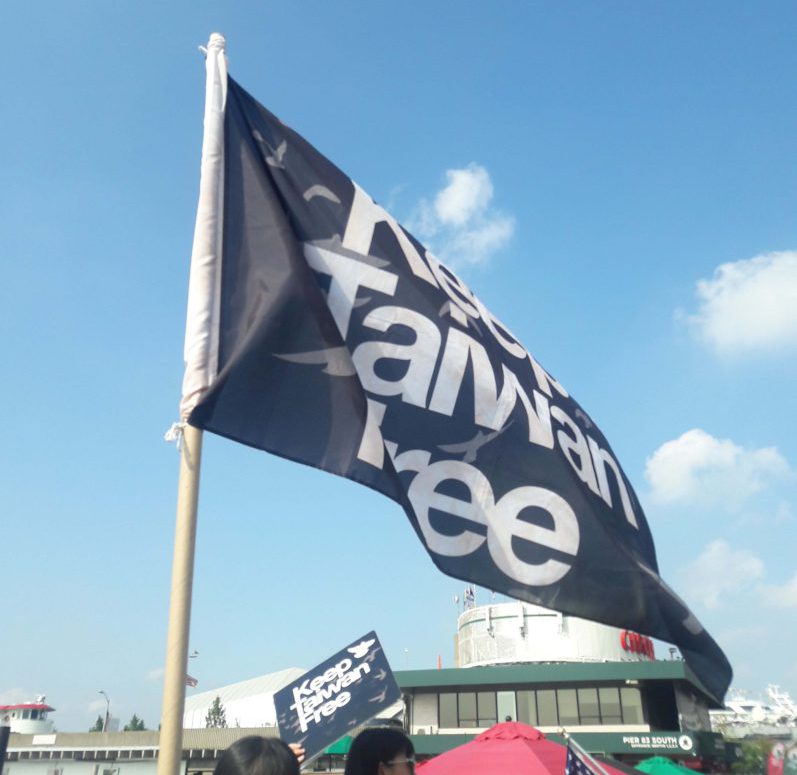 The Conclusion of the March

When we finally arrived at the end of our 3-mile march to our final destination at United Nations Park, the mad chants continued as there was a special Taiwanese band and singer awaiting us ready to perform traditional Taiwanese music.

We ALL congregated around the revival in a celebratory atmosphere, men and women of all ages smiling and singing along. 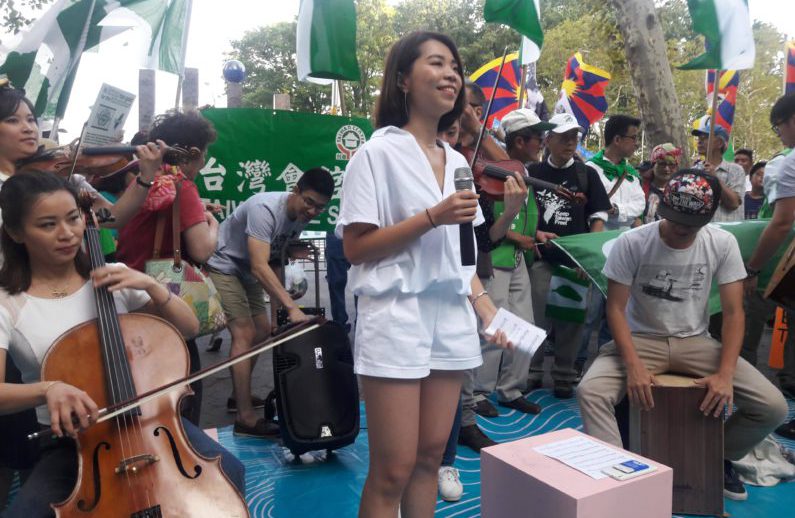 More special guests were introduced to give their final speeches championing the cause for Taiwan. Some of whom participated on the "Sunflower Movement" in Taipei in 2014. The chants of "UN for Taiwan" and "Keep Taiwan Free" resonated louder and truer than ever. 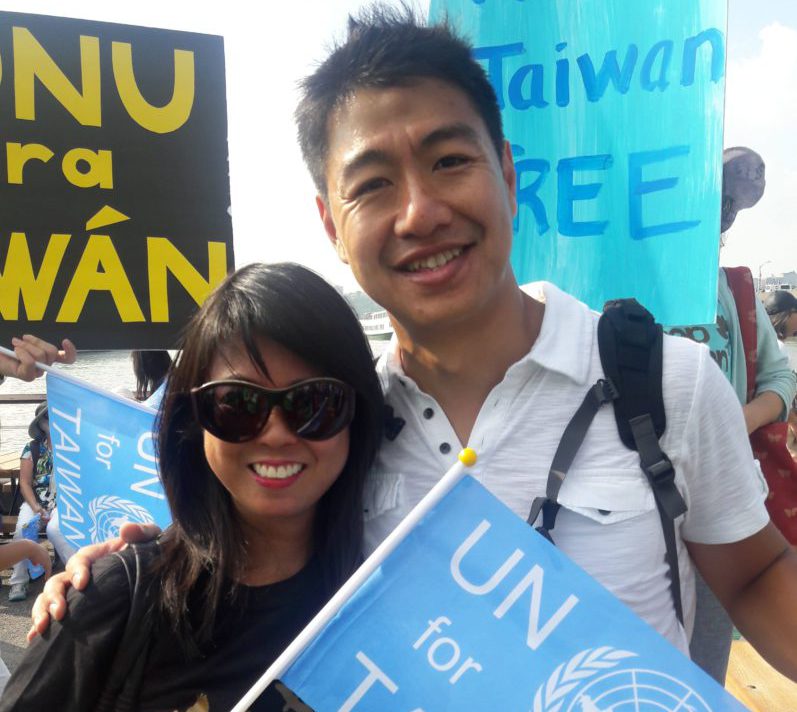 Then there were other Taiwanese activist speakers from different organizations from around New York City. 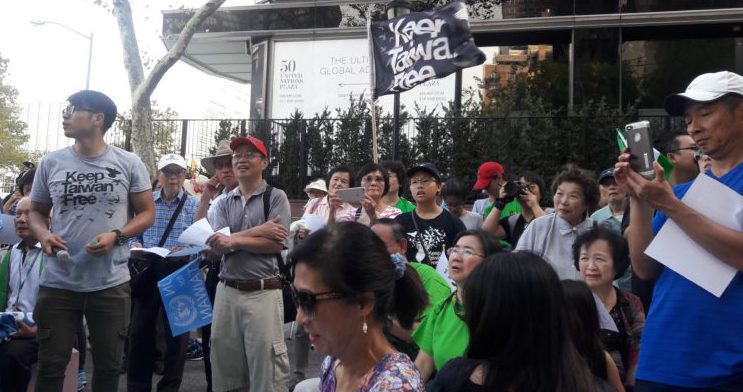 One such activist commented in front of the rousing group, “Some of my friends would tell me in the past why do I continue to “fight for Taiwan independence” when you’ve been doing this for 20 years and nothing has changed.

I would say to them, “When I was going to school 25 years ago, I would ask my mother the same thing. And she would say to me, “When I was your age, life was so much more difficult with the reign of White Terror Era and Marshall Law. You don’t know how easy you have it today.”

“Well, I got so mad at what she said I hung up on her!” (Uproarious laughter filled the crowd!) 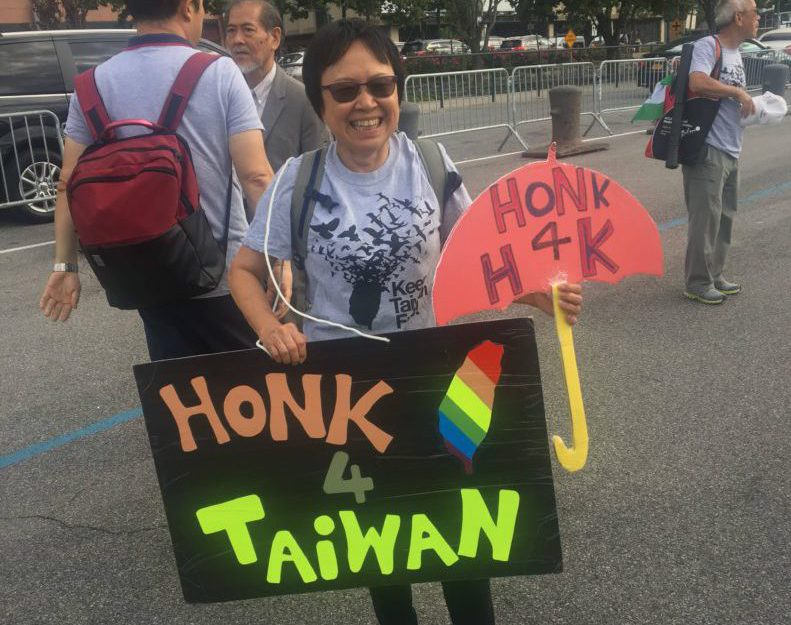 However now when I look back, I know my mother was right. Because in 20 years when my kids are all grown up and Taiwan is free, when they ask me a similar question, I want to be able to answer to them,

“…Thankfully we did not give up the fight over 20 years ago, nor did your grandmother give up the fight 45 years ago. We both kept on and persevered.  Despite amazing difficulties, we marched forward and pressed onward until that fateful day when Taiwan was first officially recognized as a Free Nation by the United Sates Council and China. I could not be prouder and happier.”

To end the rally, there was the famous Taiwanese rapper named Dwagie who spoke. When he arrived at the podium he yelled to the crowd, “I cannot speak well, but if you don’t mind I’m just gonna “rap” my part right now!” 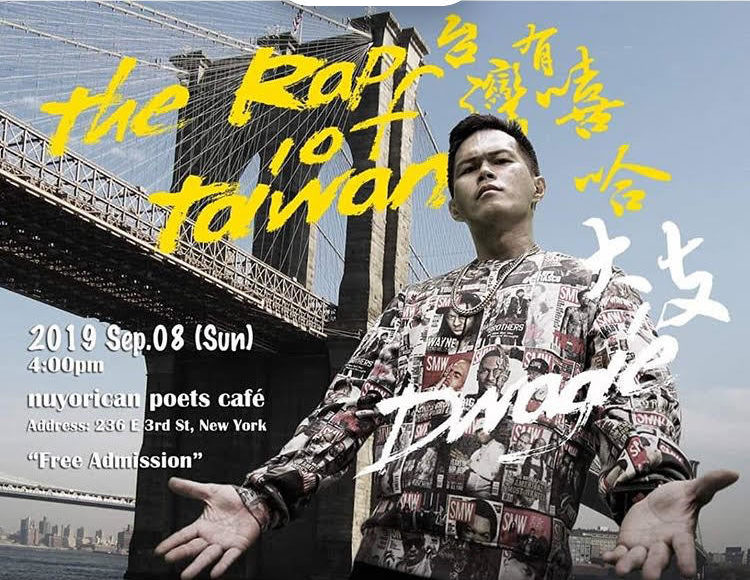 And boy, let me tell you did Dwagie ever!

As the last “speaker” of the event, at the end of his rap the crowd went wild and was highly entertained!

It was now past 5:32pm, and the organizers mentioned the final speakers would speak acoustically, as there was a strict ordinance in place that microphone amplification was only allowed to be used until 5:30pm. 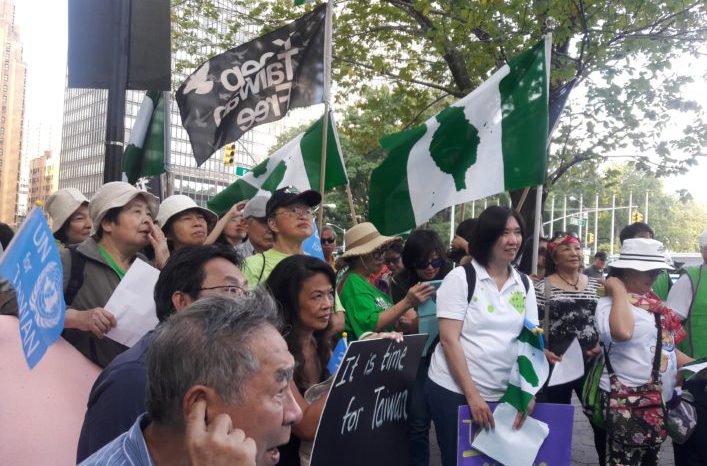 Our 3 hour 15 minute rally was concluded by a group photo op, showing it is indeed possible to organize and conduct an entire demonstration so passionate and determined, yet one that is very organized, civil, and peaceful.

It was indeed a proud day for Taiwanese unity, and the freedoms all want to be recognized for. 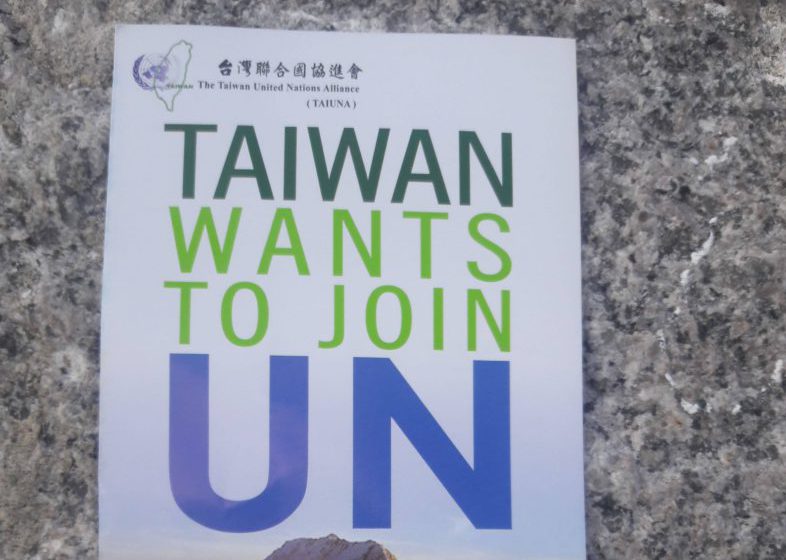 This is the type of belief, enthusiasm, discipline, and commitment that we all must strive for to make our online businesses successful high earning passive income generators.

Thank you for reading about how I joined the rally for “Keep Taiwan Free” and discovered that strong passionate beliefs in any cause and respectful discipline can go hand in hand.

Please visit me at my awesome online group where you can try it for free without a credit card. It is there where we can continue this discussion.

Please feel free to make your comments below.