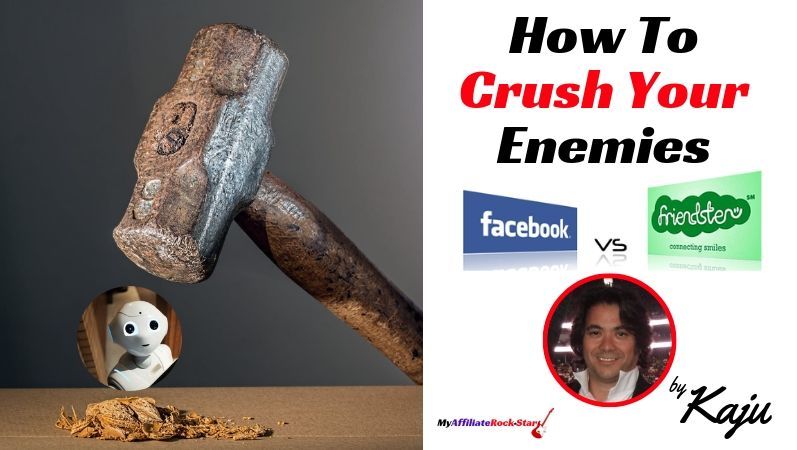 In business and in life, if you know how to crush your enemies you can become the market leader.

Over the weekend my girlfriend came upon a wonderful podcast about the early social media platform Friendster that intrigued us, and the reason why it ultimately failed.

We previously had a conversation about "What ever happened to Friendster?" it was the perfect time to listen.

Stumbling upon and immersing myself in such an intriguing true story told over the weekend by the podcast host conjured such formidable images into my imagination. It really started me thinking.....

Likened to the great legends of David and Goliath, and Mephistopheles who ultimately came to collect the soul of Faustus who was already damned, here was a true modern tale of how a first to market leader was overtaken by a dominant "copycat."

However, who was the fool in the end?

This podcast inspired me to write this article.

So here is the epic true story of “Facebook vs. Friendster”: A Tale of Opposite Fates. This true tale cites a prototypical example for why a new ground-breaking product or service that is often first to market will not become the leader in its industry.

It is the prototypical market leader example of how to crush your enemies.

There are affiliate links within this post. What this  means is that if you decide to purchase anything through one of my links, I'll be rewarded with a small commission at absolutely no extra cost to you. This small commission helps me run and maintain my website.

Does anyone remember “Friendster”? Or remembers how its name became the butt of the joke?

Friendster was a company that pioneered social media and was destined for greatness, but failed spectacularly.

Ultimately, it was a combination of tech loading time problems, in fighting, and management’s own ineptitude in being able to scale the business to meet user demand which lead to its demise. Facebook would later model it and build a network of over 2 Billion users. 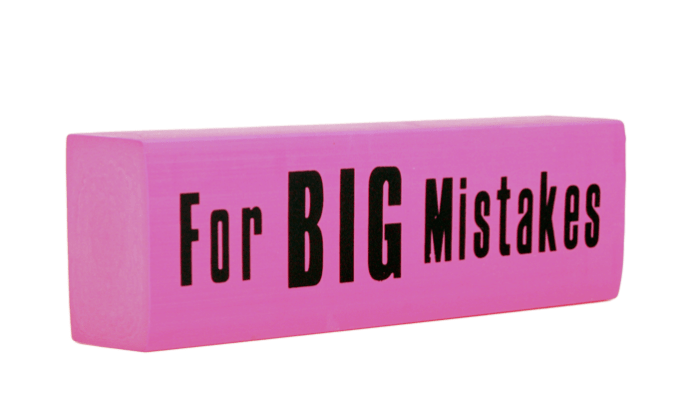 How to Crush Your Enemies: Abram's Big Mistake

Jonathan Abrams, a Canadian computer program, founded Friendster in March 2002. The site started in a basement with ten friends and went live that same month. It grew to a several hundred within a few weeks and built up to over 3 million users by early 2003.

He could have gone down as one of the most successful tech founders in history. Instead today in the online world, Abrams name is synonymous with total failure.

By July 2003, Friendster grew to over 4 million users. However, the CEO noticed they were losing members as they could not keep up with demand. In addition, the platform was having long load time issues. Abram's remembers, "Most companies look forward to growing, we dreaded growth cause we couldn't keep up with our users." However, this would be far from Abram's biggest blunder.

Abrams wanted to expand the business, so he sought funding by Silicon Valley venture capital firms Kleiner, Perkins, Caulfiend, and Byers and Benchmark Capital in early 2003 for a reported valuation of $53 million.

By April 2003, Abrams was approached by Google, who offered to buy Friendster for $30 million. Abrams simultaneously was being courted by the aforementioned venture capital firms who were both offering $13 million to take an equity position.

Abrams faced a major decision. Either to take funding from one of the major venture capital firms from Silicon Valley, or to be bought by Google.

Google offered $30 million to buy out Friendster, but Abrams ultimately turned the offer down. The $13 million funding offer by Kleiner, Perkins, Caulfield, and Byers was accepted and the VC firm now assigned its own Board of Directors, with Abrams remaining as CEO.

By October 2003, Abrams was removed as CEO by the new Board of Directors and replaced by interim CEO Tim Koogle, who previously served as president and CEO at Yahoo.

He brought on experienced investors to try to scale the company in late up 2003. Instead those investors who became the Board of Directors, fired Abrams.

Abrams subsequent turn down of Google’s offer would prove to be Abram's ultimate downfall. Friendster's decision to stay private instead of selling to Google in 2003 is considered one of the biggest blunders of Silicon Valley. 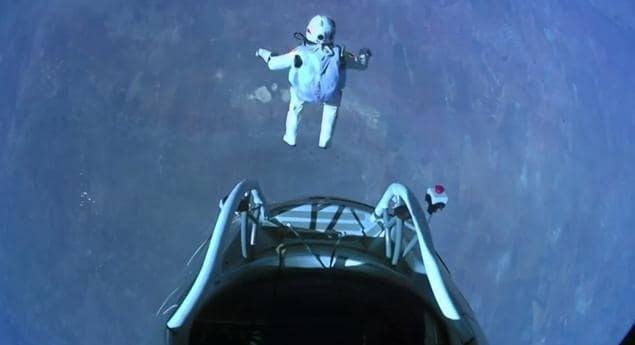 How to Crush Your Enemies: Friendster Was Falling Fast

By early 2004, Friendster was stumbling while My Space was rising, The Friendster users who no longer had patience for their slow servers migrated to MySpace.

By late 2004, it was all but over. The sky was falling down on Friendster. Meanwhile there was a juggernaut ready to take over. And soon even MySpace would become victim to its dominance.

Altogether there would be 6 CEO’s. Koogle was later replaced by Scott Sassa in June 2004. Sassa left in May 2005 and was replaced by Taek Kwon. Taek Kwon was succeeded by Kent Lindstrom, following a recapitalization by Kleiner and Benchmark that valued Friendster at less than 5% of its 2003 valuation.

However, this was not Friendster’s ultimate cause of demise. That was caused by a then 19-year old Harvard dropout who with a small team was building an all-college networking site out of Harvard University. 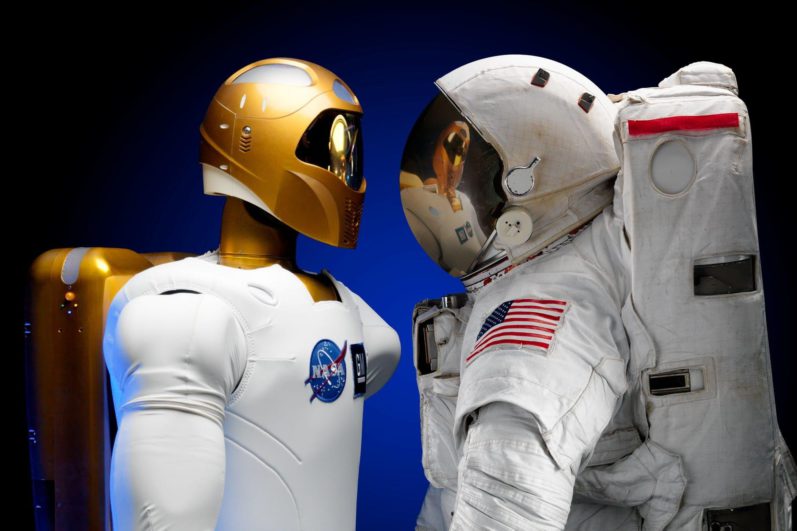 The Juggernaut vs the Jester

The Facebook-Friendster model is a classic example of how a 2nd and 3rd competitor to market becomes the market leader. In early 2003, Friendster dominated the early days of social media. However, by early 2004 its light was quickly fading.

Meanwhile, as Facebook was growing, it copied the best attributes of Friendster then expanded upon them. And later to add insult to injury, bought 19 of its social media patents.

In its early days, Facebook was all about profiles. By 2004, there was a whole practice of perfecting one's profile, arranging boxes neatly and curating your Facebook apps as kind of a game in itself.

Then Mark Zuckerberg rightly recognized that Facebook's news feed was the key to its long-term success. While the site was still attracting new people, he revamped it to elevate the news feed's importance.

Facebook's genius is that it first lured us in with gaming and profiles, then after we'd gorged ourselves and had enough, snared us with the news feed. Friendster really didn't stand a chance once Facebook made the news feed its focus. Even if Friendster introduced a comparable experience to the news feed, it was far too late. Its audience had already abandoned it.

Ultimately, Friendster sowed the seeds of its own failure by not fully understanding the subtleties of social media when it mattered most to its own existence. It failed to realize user profiles are only one element of the social media experience, and not the most important one

So if you have a great business plan but think someone else has already taken it you and are not first to market, remember “first to market” rarely becomes the market leader in the field.

The Facebook -Friendster compete model is the perfect example of how a “copycat” takes over and goes on to become the market leader. 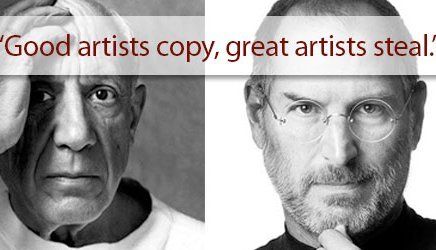 Or how an aggressive market apex predator can teach you how to crush your enemies.

“It takes a good artist to copy, but a GREAT artist to steal.”

Thanks for reading, and I hope to hear your comments.

Please leave them below.